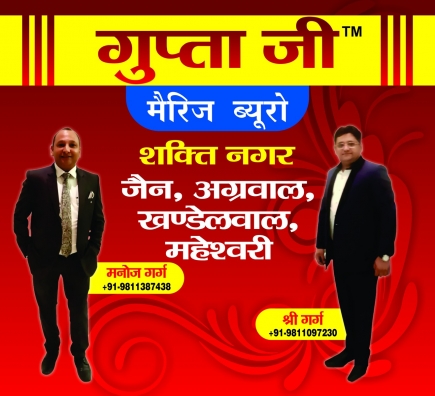 Mr. Manoj Kumar Garg (+91-9811387438) and Mr. Shree Garg ( +91-9811097230) are born and brought up in Naya Bazar Delhi .They are a popular man in his society for promoting an ideal Marriage bureau. They are holding a good reputation in Baniya Community One of the best marriage bureau in Delhi.

Arranged marriages have been around in Delhi/NCR/Out of Delhi as long as (Since 1995) probably the institution of marriage itself. With the passage of time we have used various methods such as marriage bureaus, print advertisements, community forums and even progressive technologies like Internet to perform this task of “arranging" a marriage.

Marriage is one of the oldest institutions in the world. It is spiritual bond between two souls that is made in heaven and celebrated on earth. Aggarwal, Jindal, Bansal, Kansal, Mittal, Goel, Singhal Gupta, Jain, Marwari, Khandelwal,Maheshwari and Other Baniya Community Members

Hold on,don't go now.Post your ads and promote easy wath you sell or your services.Dont forget about our premium packages and get up to 10X more exposure.Try us now!


Cancel Report
We use cookies to ensure that we give you the best experience on our website. If you continue to use this site we will assume that you are happy with it.OkPrivacy policy